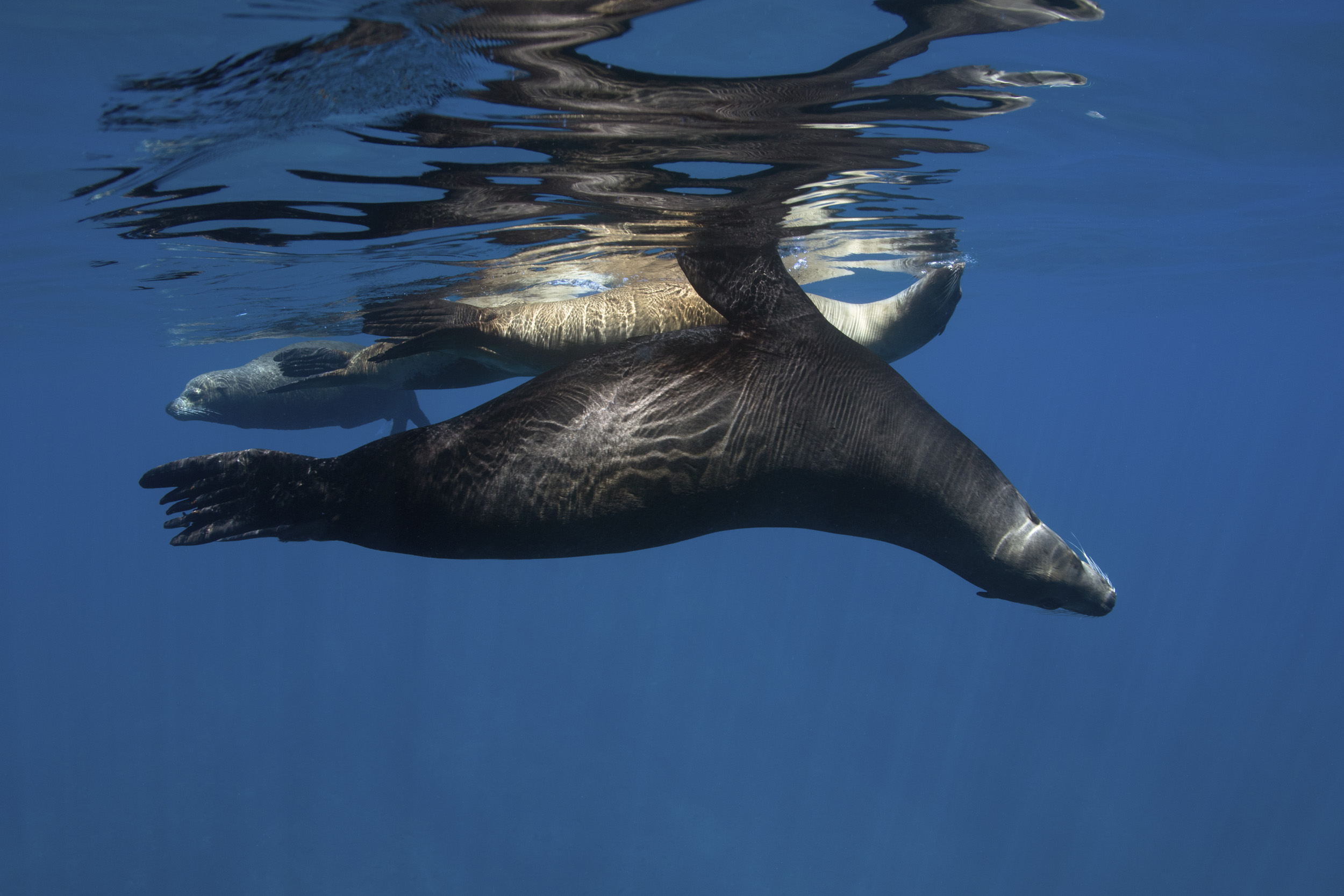 My friends and I had been diving with sea lions for at least two days by then. But many of my images were a bit blurry – sea lions are
FAST and move unpredictably. You can’t guess where or in what position they’ll be three or four seconds after you plan a shot.
Despite wonderful opportunities nearly no shots were great.

BUT this particular morning I had a 15- or more-minute swim with a manta ray at the surface.
I’d seen mantas dozens of times – and been close to them by chance…
I knew they are intelligent fish – with the biggest brain size and, reportedly, the ability to recognize individual divers, as well as demonstrate gratitude to people who have disentangled them from nets.
An incredible swim with a big manta, which stayed no more than three or four meters away from me at any time, was MORE than enough to make up for mediocre photographs of blurring sea lions.
One can tell with an animal like that, an animal that’s watching you the whole time, never straying and never fleeing at top speed, that it has intelligence. You just sense it. Every minute you’re thinking how lucky you are
And how wonderful and beautiful the animal is.

The sea lions above came as I was about to leave the manta ray, after I had had 15 or more minutes with this amazing creature, photographing the hell out of it (200 images? I couldn’t help myself. It was just too good!)

The sea lions were visible from some distance away and, as I swam to them, the manta came into my frame as well. That made for very nice photographs, too.

It was a family of pinnipeds just sitting at the surface, resting and joyful. Sea lions, like dolphins, nearly always look joyful.
There were two or three adults and one much smaller individual. Perhaps two parents and a child or two parents, a child, and an aunt or friend.
I got very close to them, very close indeed, but still hesitated a bit: adult males protect and defend their mates and offspring. Sometimes vehemently.
But these guys were very calm. No one seemed bothered at all. Napping and dreaming, floating about.
I stayed about 4 meters away and photographed them for maybe 10-15 minutes.
FINALLY I got good shots of sea lions in La Paz – and not at Los Islotes, my usual spot – which made up for the hundreds of mediocre ones from two days before. 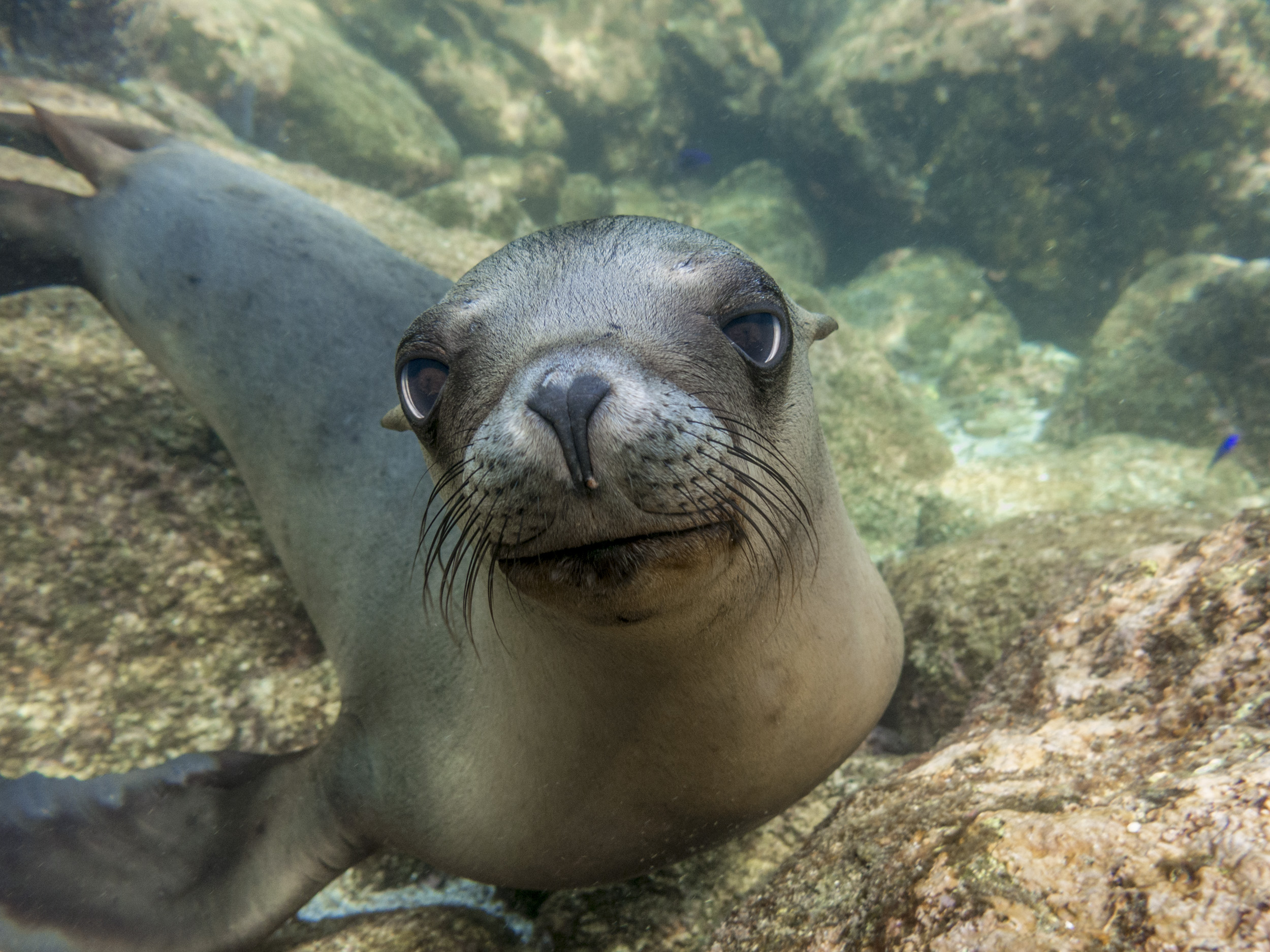 One of the sweetest faces – and animals – in the world!

If you were to change this animal’s colour and ears it would become my Isa
(Isabella), the adorable and touching dog I picked up on a beach in Cartagena who is now 11.

Los Islotes near La Paz in Mexico is a famous sea lion colony, with hundreds of animals, visited daily
By dozens of snorkelers and divers and home to the most inquisitive, sweet and mischievous pups
You will ever meet.

I’m not entirely sure that this was the pup in question but I played with one sea lion pup in Mexico for an hour. Every time it surfaced I followed it. Every time I descended it followed me.
It was like an adoring puppy.
I was compelled to break the “no touching” rule.
It let me rub its stomach, it nibbled on my tank, it pulled at my remaining strands of hair.
Eventually I could even scratch its throat. Except for the fact that it took my fingers in its mouth and playfully, gently nibbled on them every time.
It was such an amazing encounter, lasting over an hour (I expected the dive to end in 45 minutes but was in the water for an hour ten) and I felt such a strong bond I basically fell in love! I was literally miserable, floored, feeling the physical pain of heartbreak, my chest feeling depressed, when it wasn’t there on the next dive.
The sea lions at Los Islotes, which I’ve visited three times now, are truly endearing and fun. As with most animals, humpback whales included, the young are usually the most fun.

One amazing thing about this image, which I immediately hung in my apartment after the trip, is that it was one of the very last photographs I
Saw while reviewing my images on the boat after the dive – the happiest surprise! Nearly everything I’d seen up until that point was fairly mediocre, failed to capture the excitement and emotion of the experience and failed to please the eye. Then all of a sudden, at the very end of my review, this picture appeared. And I couldn’t have been happier.

Last time I went to Los Islotes, the visibility was AWFUL, my photographs likewise, and I vowed I would return.
I was told, after whining about my images profusely, that the best visibility there is in October… and so that is the month I will return. 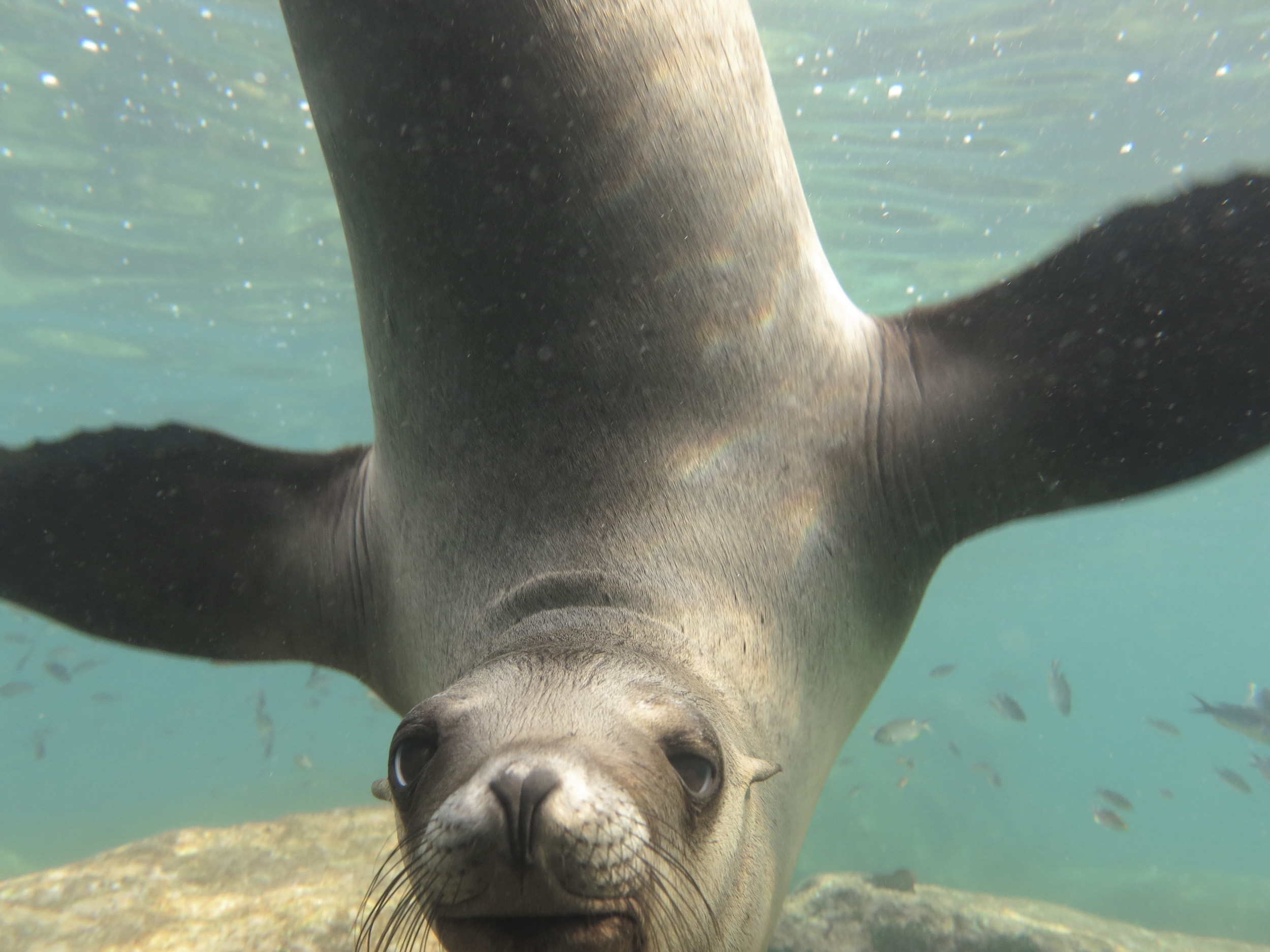 I don’t think this juvenile, too big to be a very young pup, could have posed better or been more
Amusing.
It’s a shame its chin is cut off… but I blame the sea lion, not my shooting! One can ALWAYS blame
Sea lions.
Sometimes things happen so fast that you don’t have time to frame things perfectly.
And sometimes the lens you have on or amount you’ve zoomed prevents you from getting something
“perfect”. I don’t think this pinniped would care that its portrait could have turned out better… 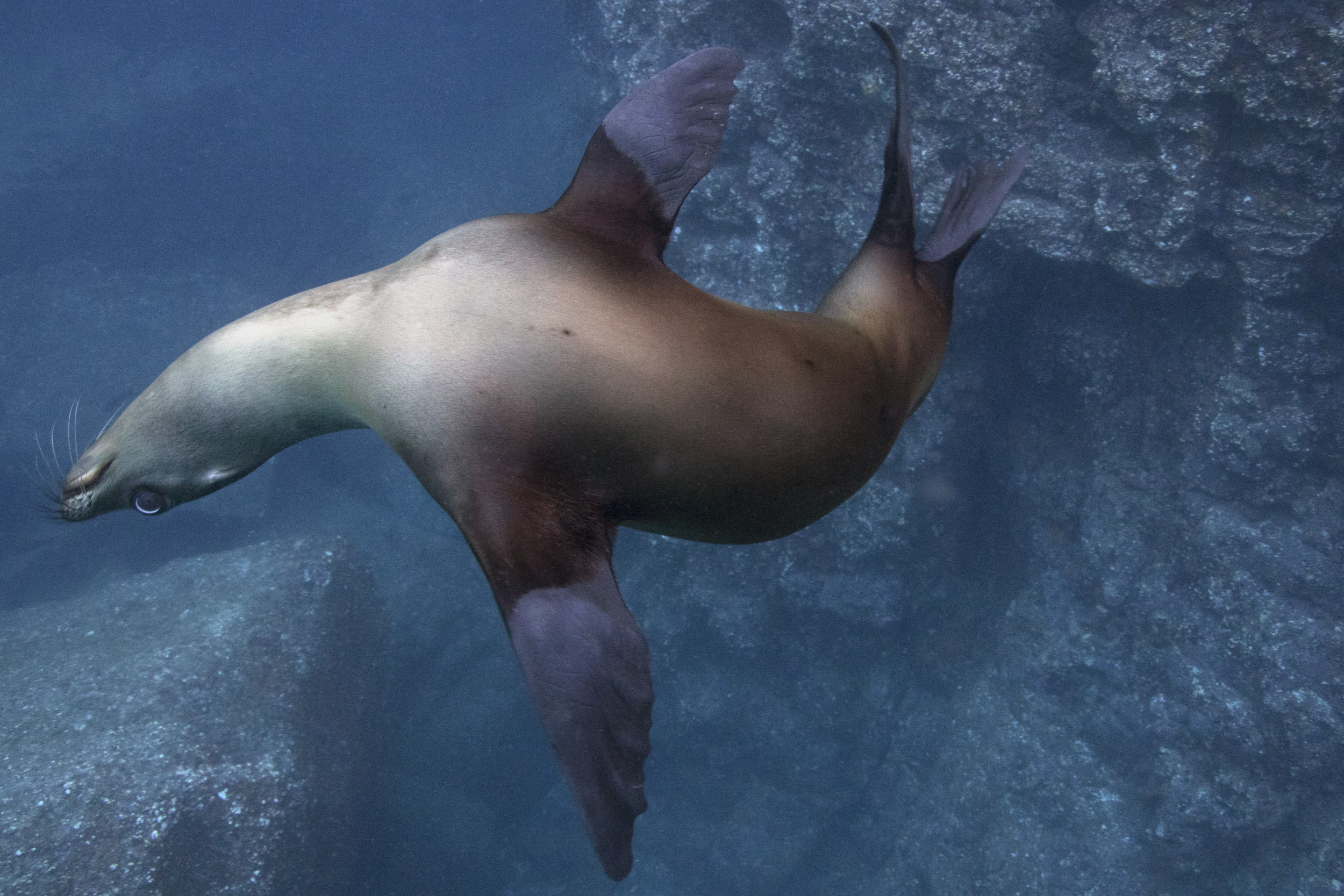 I love this shot.
Particularly how everything just fits in the frame. And the chaotic but playful shape, the ever-conscious eye.

This may be the best playing sea lion in my collection…

I love the rock behind the lobo marino, too.

This image is probably from a Mission Blue expedition with my friend Shari and with the great Sylvia Earle.
We tried to go to Cabo Pulmo three different times – the first two times a storm was slowly chasing our boat.
A hundred miles away but continually moving up the coast as we were. We were supposed to go and celebrate the 20th anniversary
Of Pulmo as a reserve – a “no-catch” area that experienced a 400 percent biomass increase after becoming protected.
Sylvia also wanted to give away some snorkelling equipment to local children; and we were all to help them learn to snorkel.

One thing people tend not to know is that sea lions are quite different to seals: “ Seals and sea lions are marine mammals called 'pinnipeds' that differ in physical characteristics and adaptations. Sea lions are brown, bark loudly, "walk" on land using their large flippers and have visible ear flaps. Seals have small flippers, wriggle on their bellies on land, and lack visible ear flaps.” 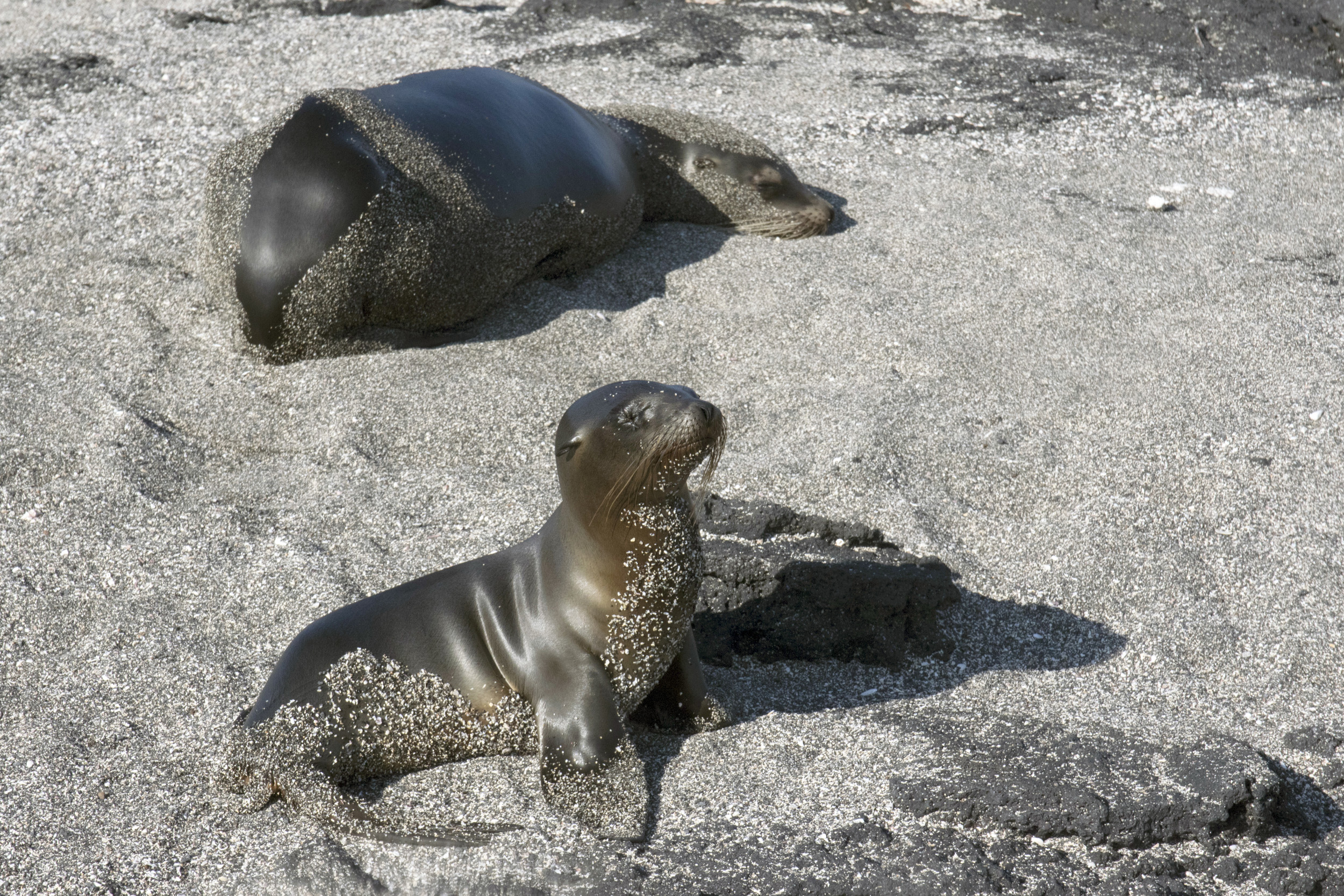 The only time I stepped out of the water onto a beach during a 10- or 12-day expedition.
I had nothing to dry my camera with, and 19 times out of 20 there are drops of water on the dome port

When you bring it out of the water. This ADORABLE and expressive pup, all sandy and sweet, was by its mother, and I HAD to shoot them.
The whole time I was photographing and watching, maybe for five minutes, I was convinced there would be
blotches from water drops on the frames; but miraculously, upon reviewing the images, there were none.

For reasons I will never fully know, this pup seemed cuter to me than any other on the trip,
Its mother disciplined it – intimidated/scolded it – several times moments after this shot.
It hadn’t done anything wrong as far as I could tell. She waddled a tiny bit towards the pup, on her fat gut,
And viciously opened her mouth at it -- eventually yelling at the poor thing at the top of her voice. 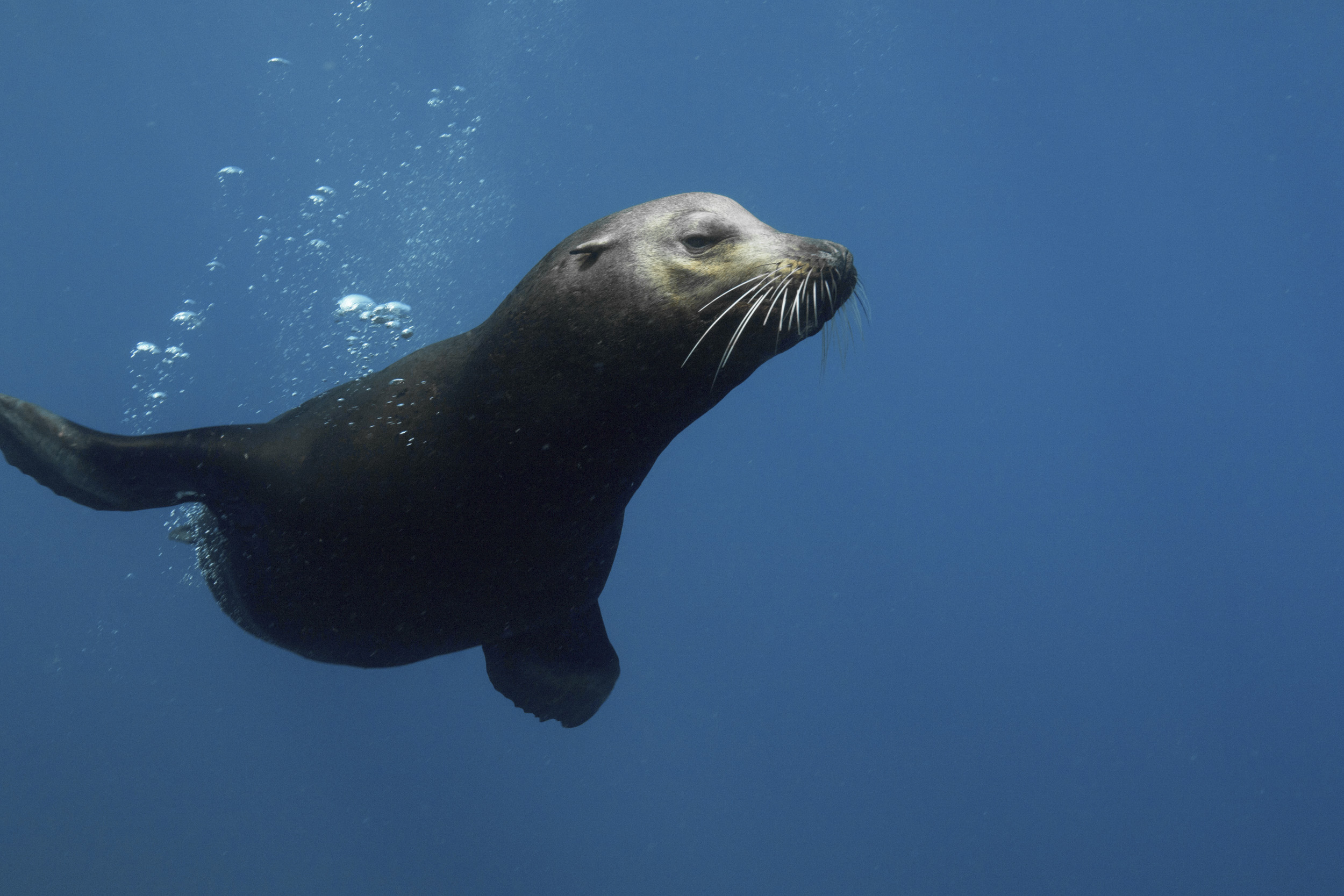 The only way I know he’s an adult male is the big bulbous forehead!

I was warned, on my first trip, against approaching big males or, more importantly, females and young
Overseen -- circled around, swum among & looked upon – and protected by big males.

Was also told that sea lions give 3 warnings before they’d do anything to hurt you.
Warning one: they’ll blow bubbles (humpback whales do this among each other sometimes. Frequently
Male humpbacks competing for the same female).
Warning two: they bare their teeth, popping open and snapping closed their mouths – a bit as if they were going to bite something.
Warning three: they circle or rush you.

Let me put it to you this way: if you didn’t see the bubbles AND you didn’t understand the bite mimicking then you
aren’t observant enough, have no clue what you’re doing and you deserve to be bitten!

Since my first sea lion swims, I’ve taught myself to stay away from big foreheads! 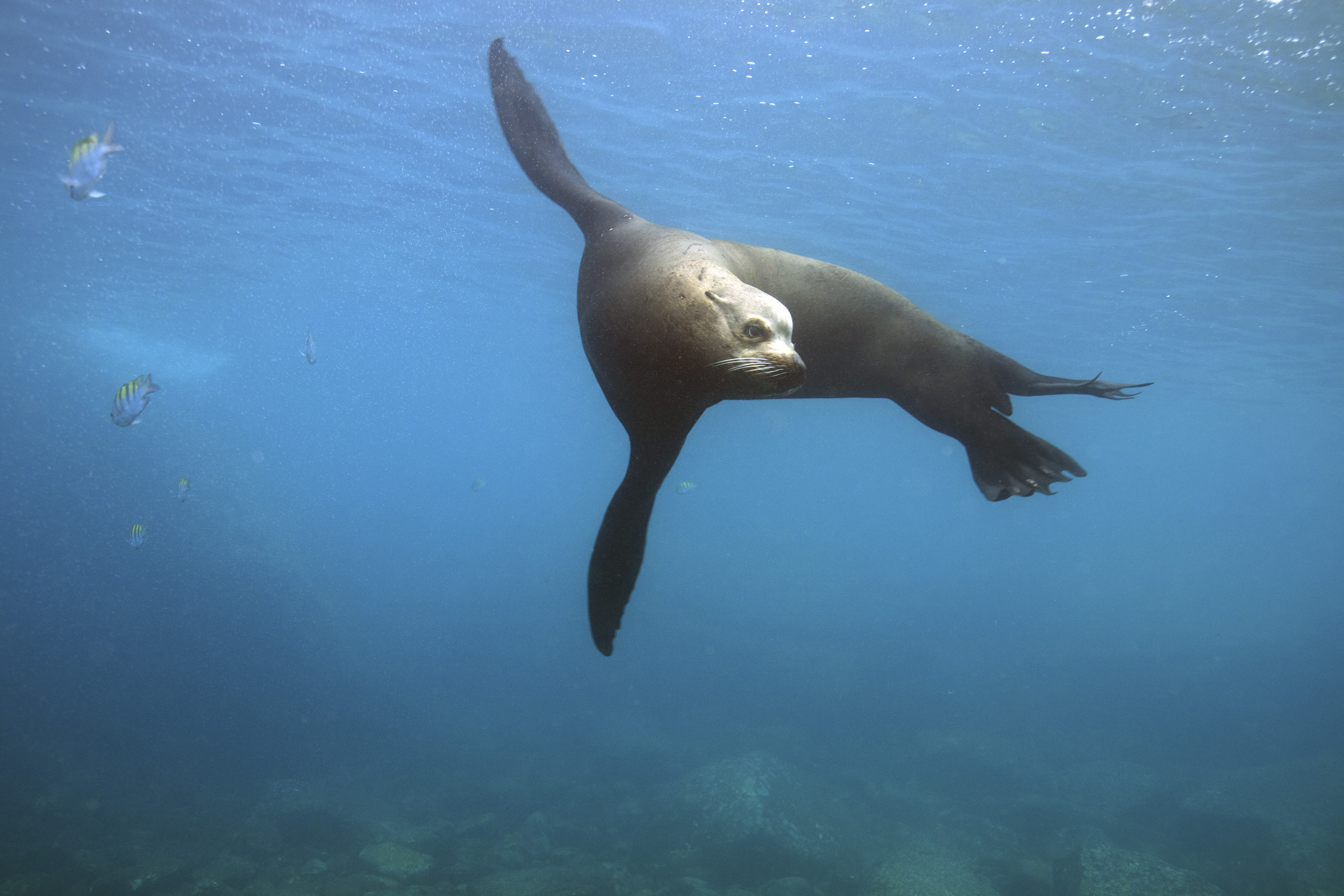 Sea lions, while frequently comedic and mischievous, can be very graceful… 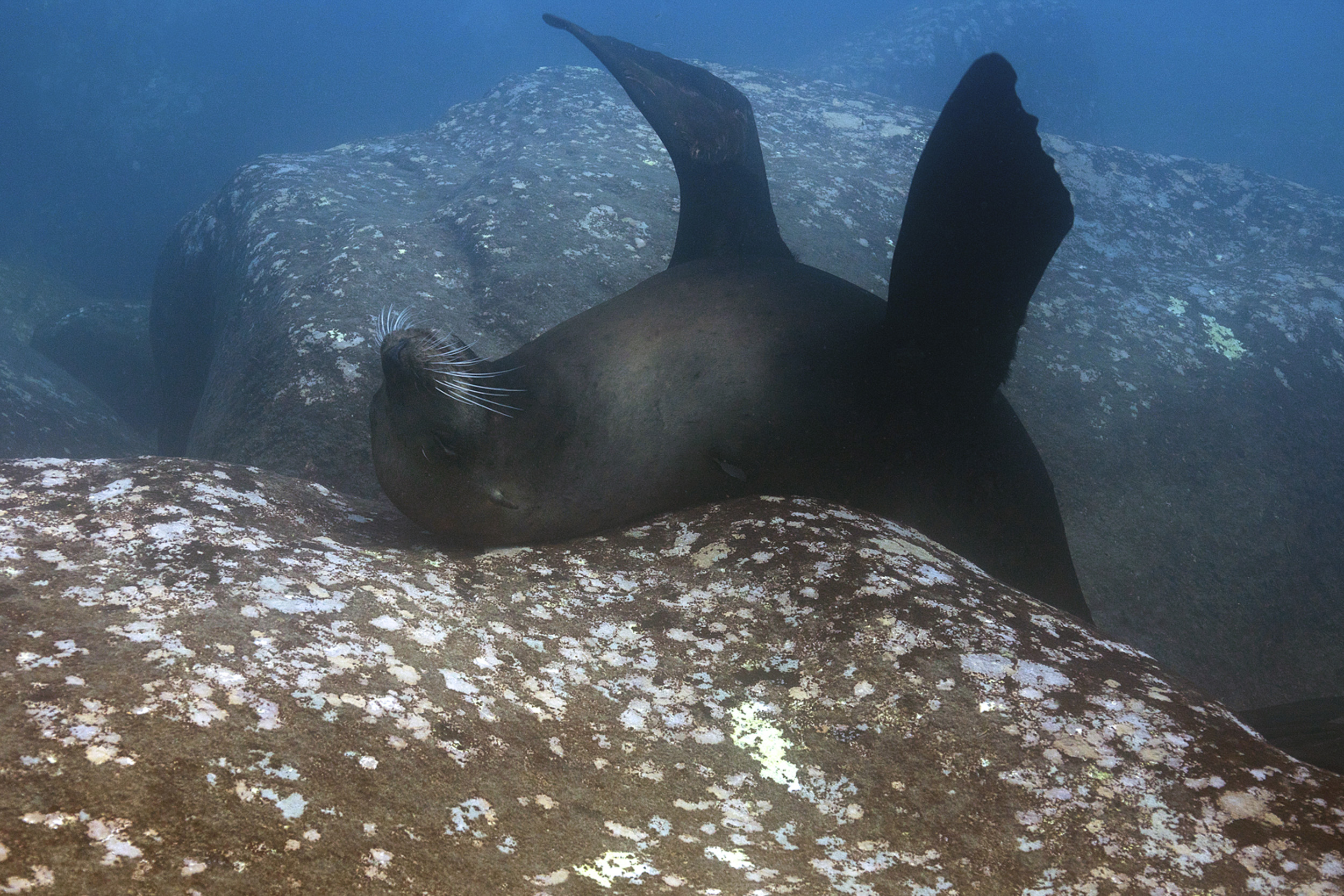 SCRATCHY SCRATCHY! LARGE FEMALE SEA LION SCRATCHING HER BACK ON THE ROCKS AT THE SMALL COLONY AT CABO PULMO, MEXICO, AUGUST 2018> Our guide last summer told us that that colony is bigger at a different time of year.
There were only about 8-12 sea lions there last August.

I think this was a female...

The water at the colony is very shallow, at most maybe 8 meters deep.
The side of the rocks closest to shore, where this lady was, was in the shadows; Most of my images were very dark,
And needed some lightening up.

This marine mammal was really fun to watch and photograph. Every now and again she’d stop scratching, move away a few meters,
Come back and start again!

She looked up at me a couple of times, which was really sweet, while she did this. 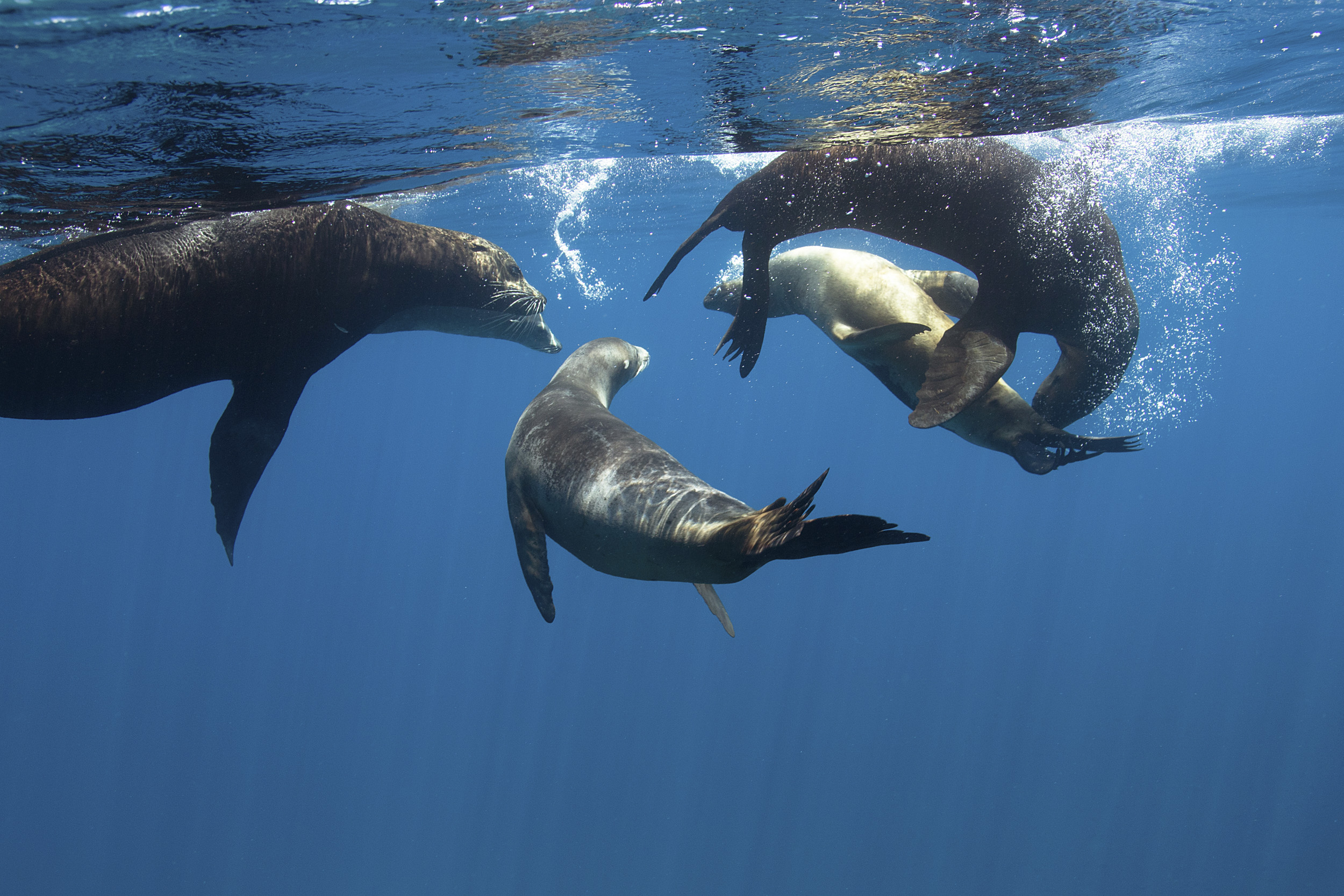 The lovely sea lion family I came upon after the wonderful swim with a manta ray that never left my side.

It couldn’t have been a better morning! Moreover, I think it was the penultimate – or even last – day of our trip! 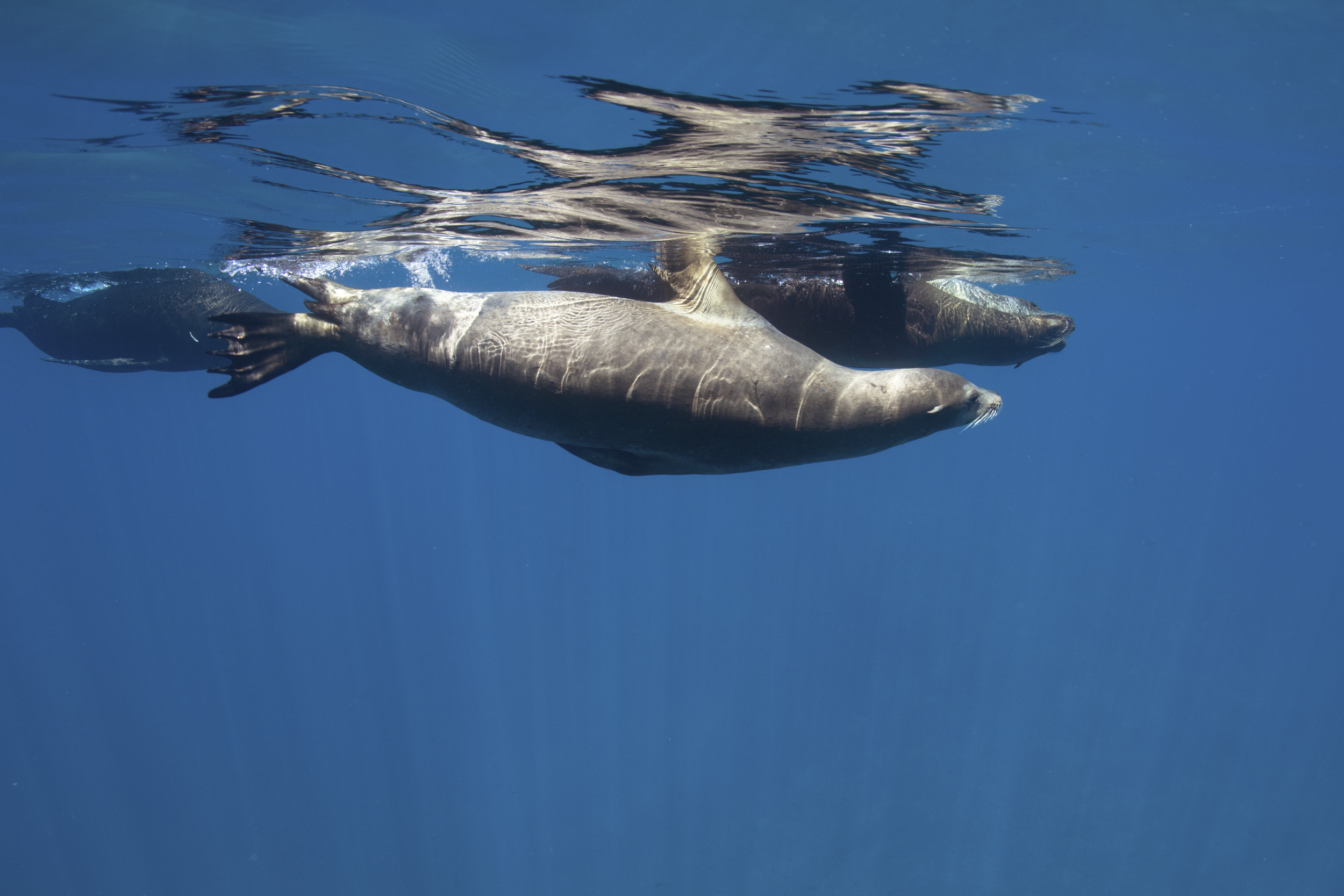 On the surface of things…

These pinnipeds were as relaxed – and loving – as any I’ve ever seen.
A very happy family. 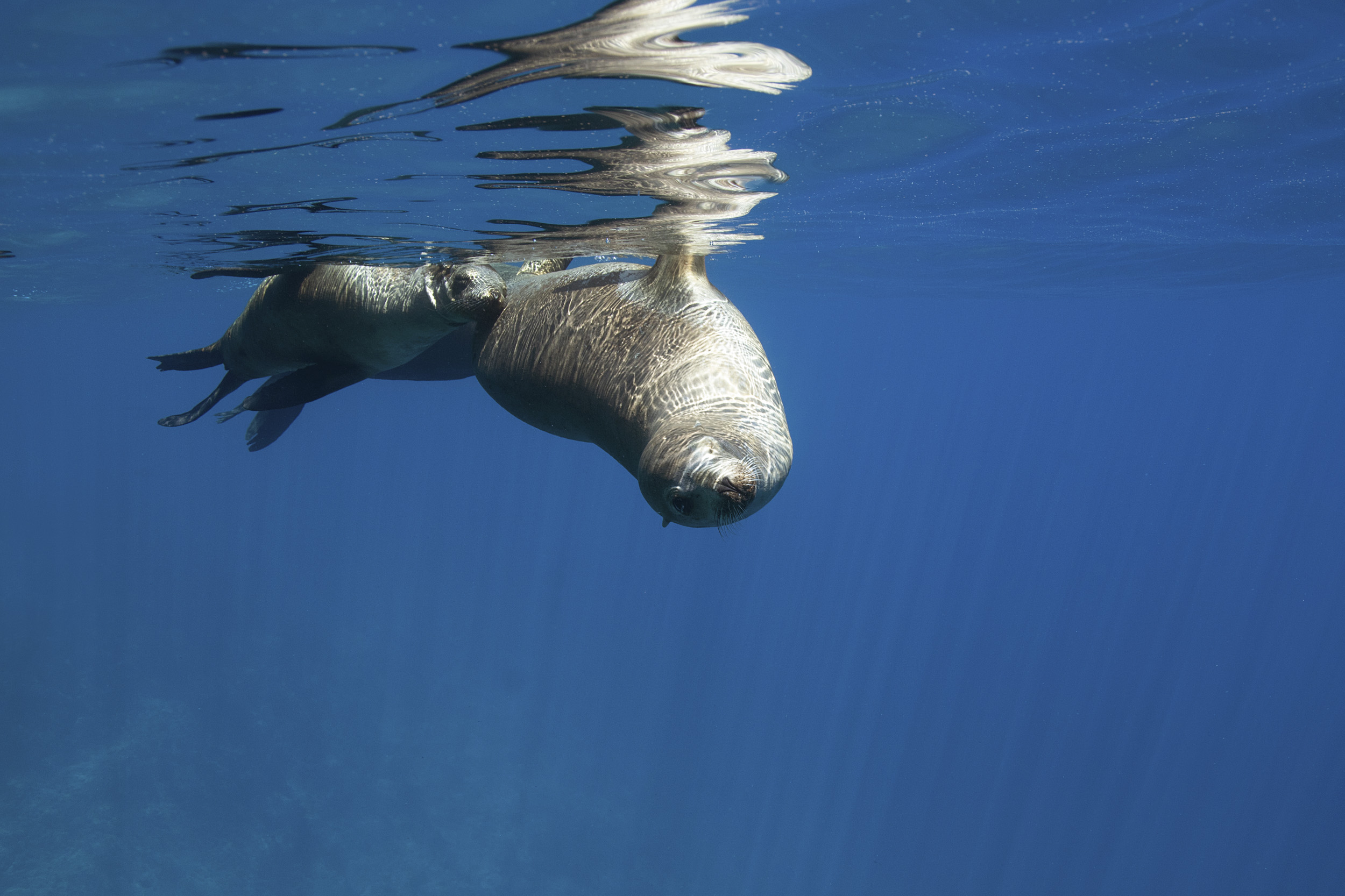 Observing wildlife doesn’t get any better than this.
Back