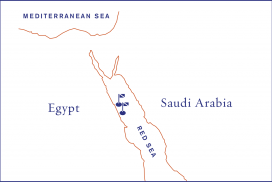 Sataya is a small horseshoe-shaped reef, about 5 kilometres in length and about 10 km off the Egyptian coast. The reef forms a small bay, which protects up to 350 spinner dolphins from currents and waves on the other side. The dolphins nap there, in shallow water after hunting squid outside the reef at night. They are asleep much of the time, with one side of their brain on and the other off—alternating hemisphere regularly … While they sleep the dolphins often cruise faster and are wholly inattentive to swimmers. They do wake up, however, and are much more interesting awake than asleep. Behaviours and numbers vary greatly. Sometimes the animals are playful and alert; sometimes they’re completely preoccupied and busy, swimming away from people most of the time. One frequent behaviour is mating. It’s as common to see a large group, numbering even a hundred individuals, as it is to see one or more smaller groups of animals.

Sometimes, if you’re very lucky, you’ll find yourself in the middle of a dozen or more animals playing gleefully or see them swim repeatedly in a circle, passing in front of swimmers over and over and at regular intervals. They always surprise you since it’s impossible to predict both the number of animals and their behaviour before you enter the water with them.

Every year either on the way to or back from Sataya, we stop at Elphinstone, a standalone reef situated about 30 kilometers north of Marsa Alam.

The reef is covered in, carpeted by colourful soft corals and frequently visited by hawksbill turtles. All the usual suspects also inhabit the reef: angelfish, butterflyfish, anthias, lionfish, snappers, moray eels, clownfish … as well as various wrasse species including the Napoleon, Klunzinger, cleaner and sling-jaw wrasse.

But it is the oceanic whitetip sharks that Elphinstone is famous and prized for. Frequently curious and supremely confident, we usually see anywhere between one and five of these magnificent animals every time we visit. Open ocean sharks that are formidable predators, they are always accompanied by pilotfish, which occasionally even form clouds around them. The oceanics are beyond beautiful—and make for wonderful models. 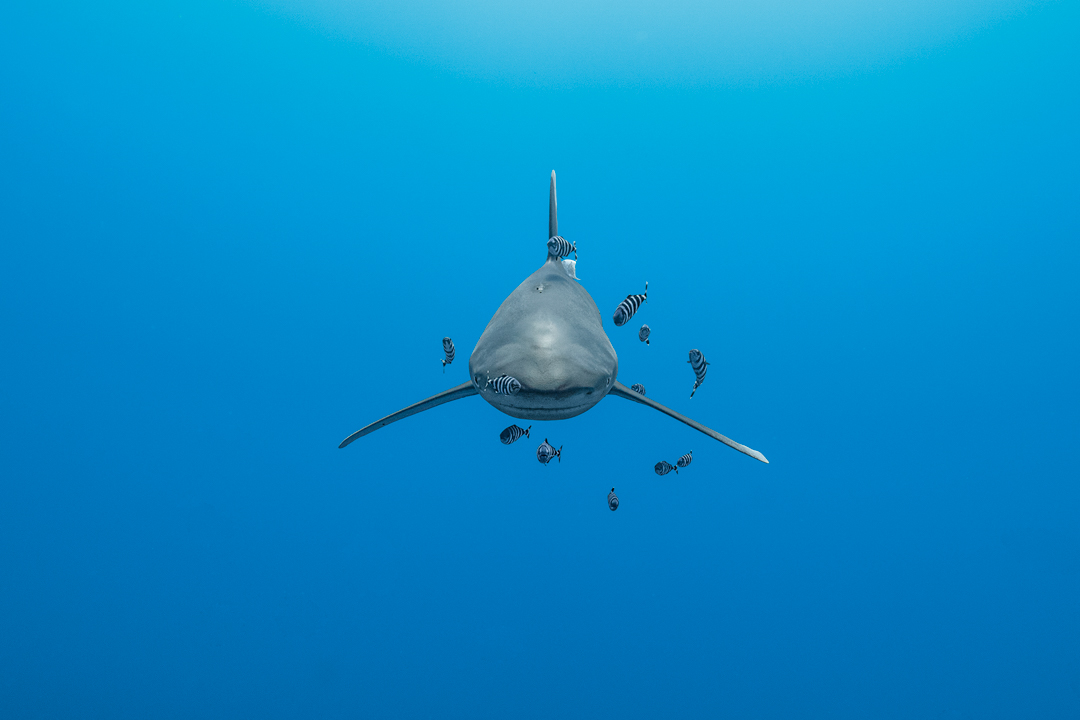 Probably the best frame of an oceanic whitetip shark I’ve ever taken.
Oceanic whitetips are very photogenic and curious anyway, but this day was
exceptional. 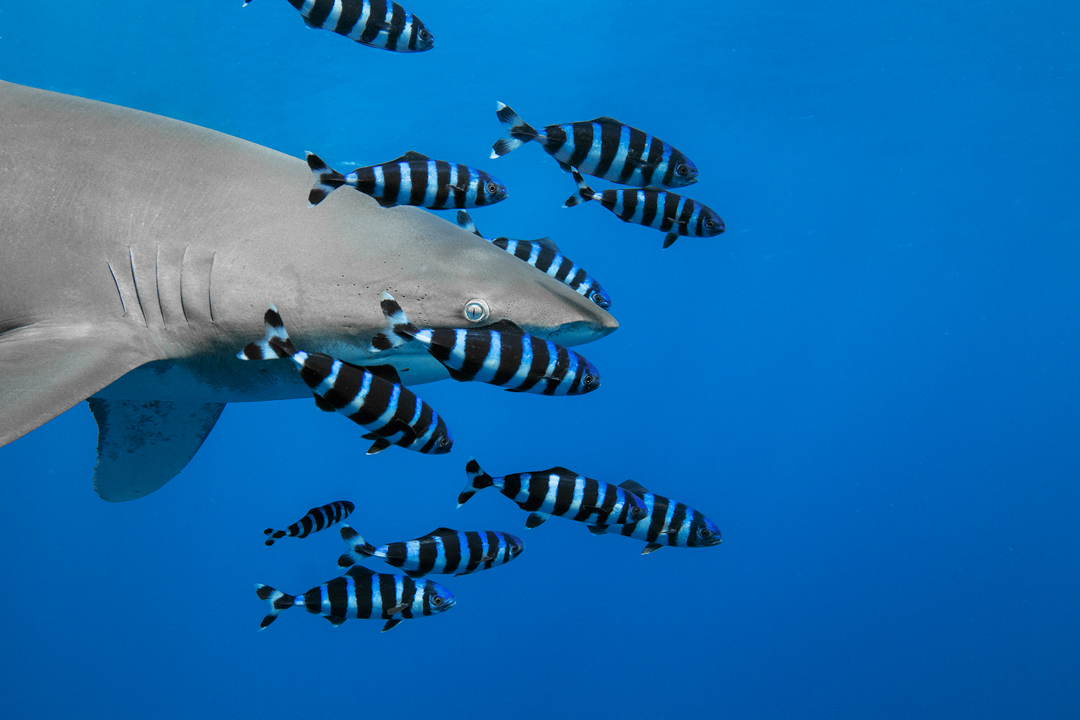 Although friends have seen—Simone Piccoli has filmed—oceanic whitetips with an entire cloud of pilotfish all around them, this is the greatest number I’ve seen so far. 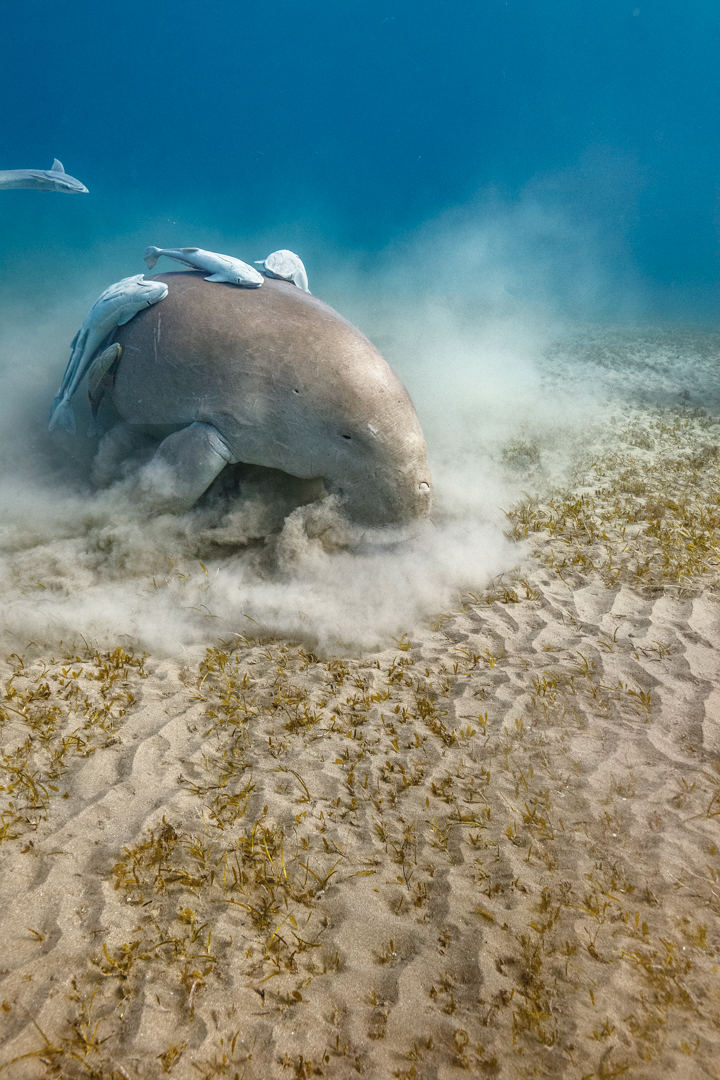 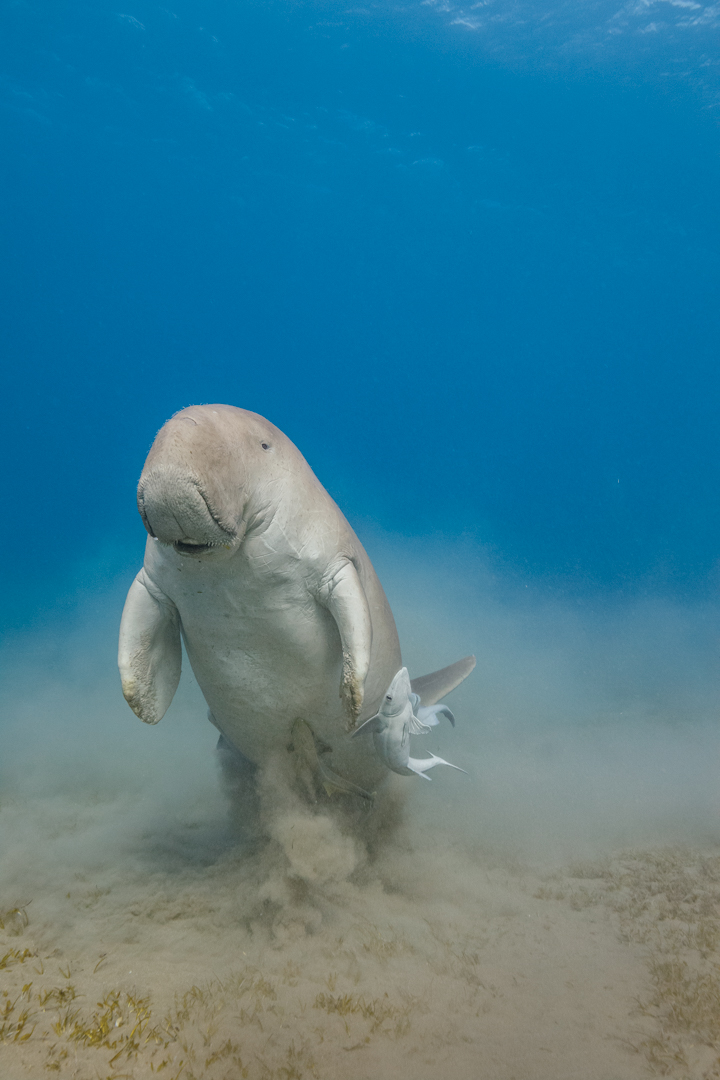 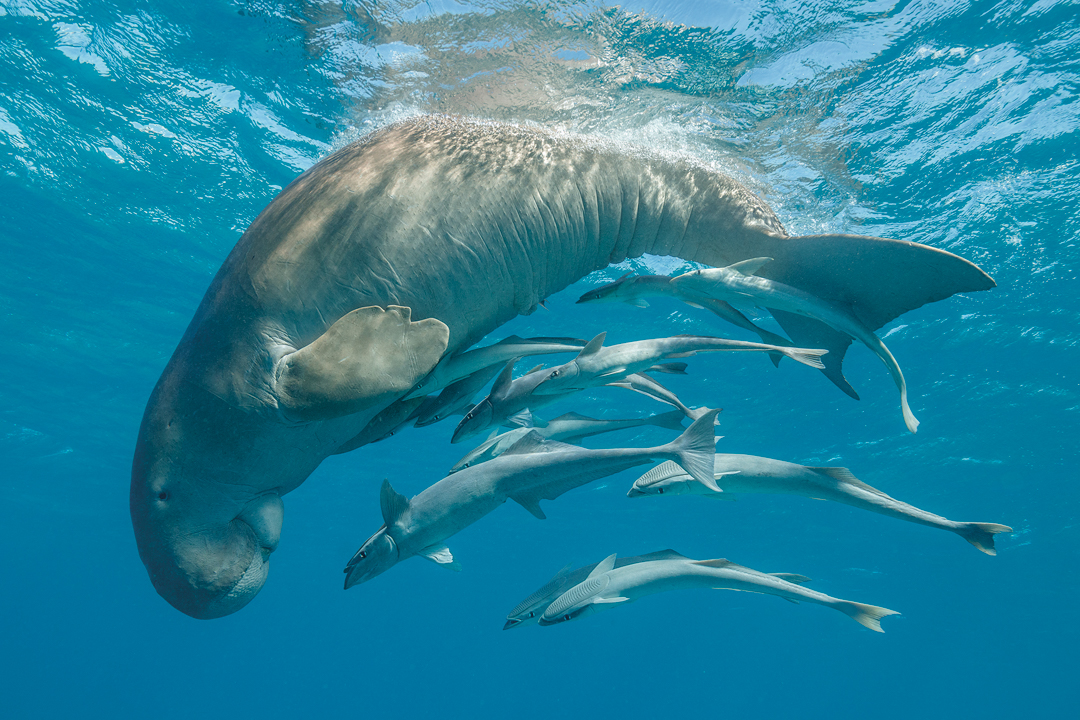 A voracious goliath with a herbaceous appetite. A creature with features so ridiculous that you might laugh.

With valves for nostrils, pinhole ears, beady eyes and a flat face with moustache and beard, this 3-metre long animal, basically 300 kilos of fat, was moving at a snail’s pace. And yet, he had us hyperventilating as he led us all around his gigantic bay in a crazy current.

He spends the entire time grazing on seagrass when he isn’t travelling to and from the surface—or breathing there. 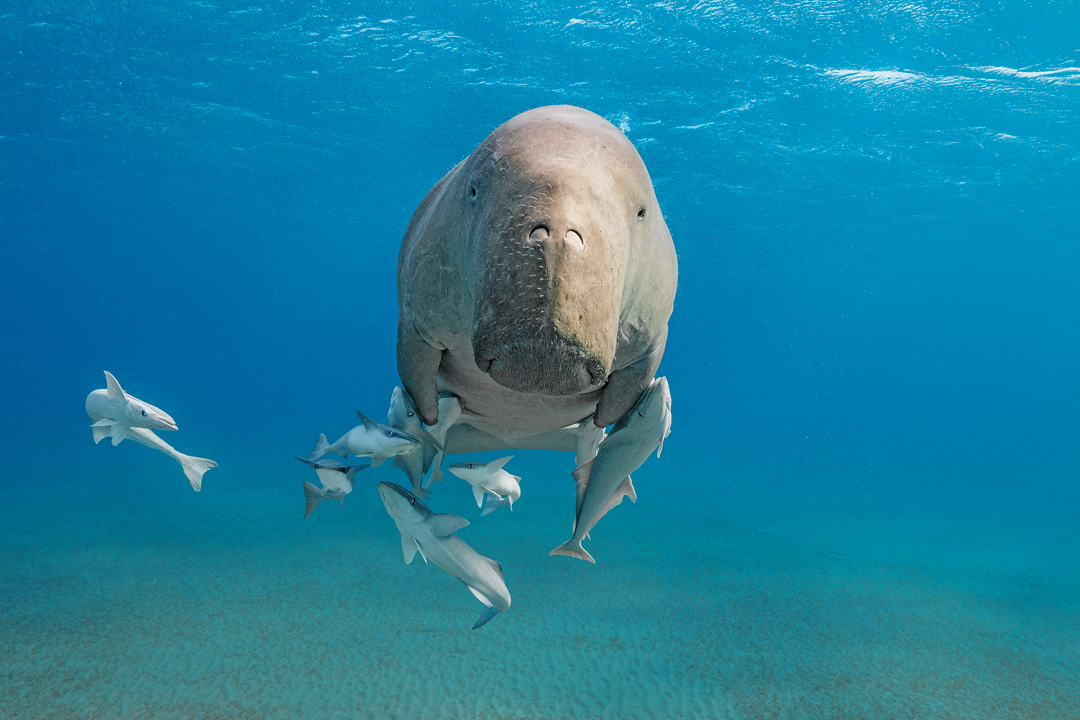 When you look at the face and body of a sea cow, it’s hard to believe they inspired mermaid lore. 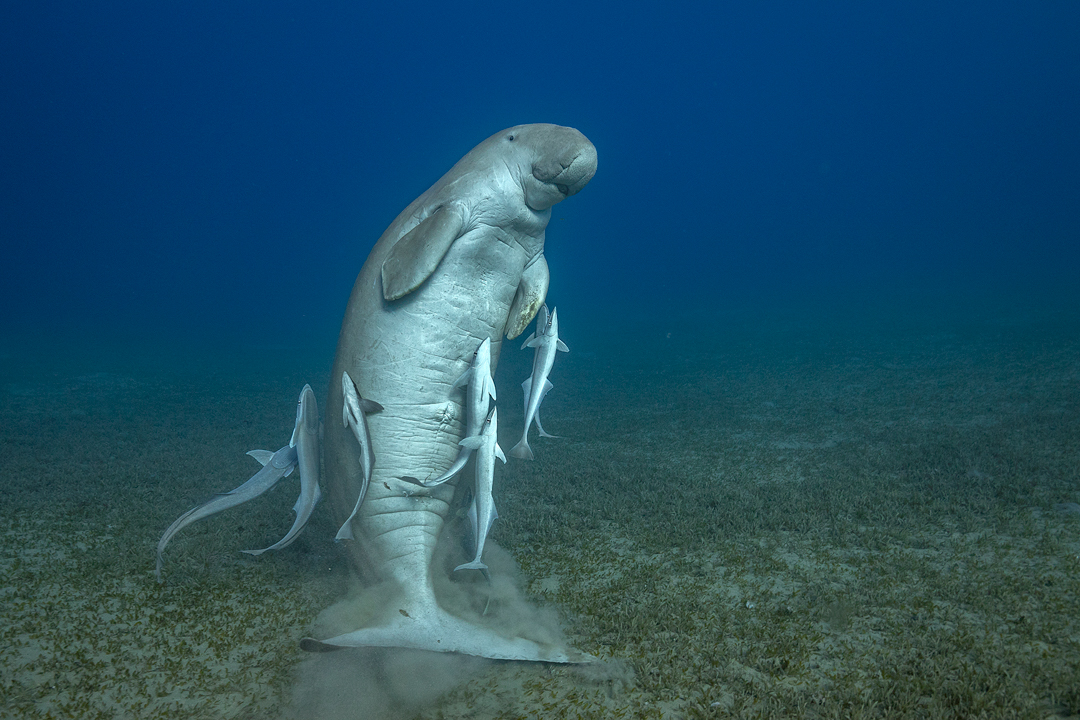 It seemed for a few seconds like he was trying to shake off his remoras as well. 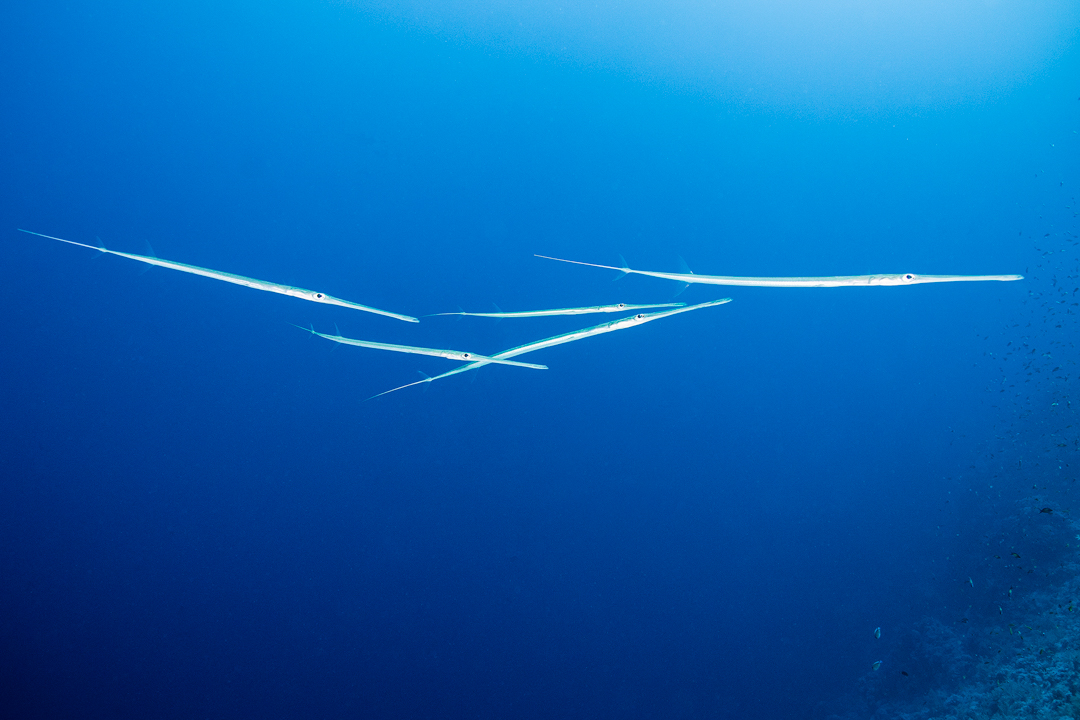 Some cornetfish gathered a few meters above the reef.

Nine times out of ten cornetfish will swim away from you if you’re quite close.
I never thought I’d find a brave or curious one. Yet the same day this photograph was taken I had 3 of them less than a meter away from me and not the slightest bit afraid. Since that day I have seen dozens of images of them close to photographers. 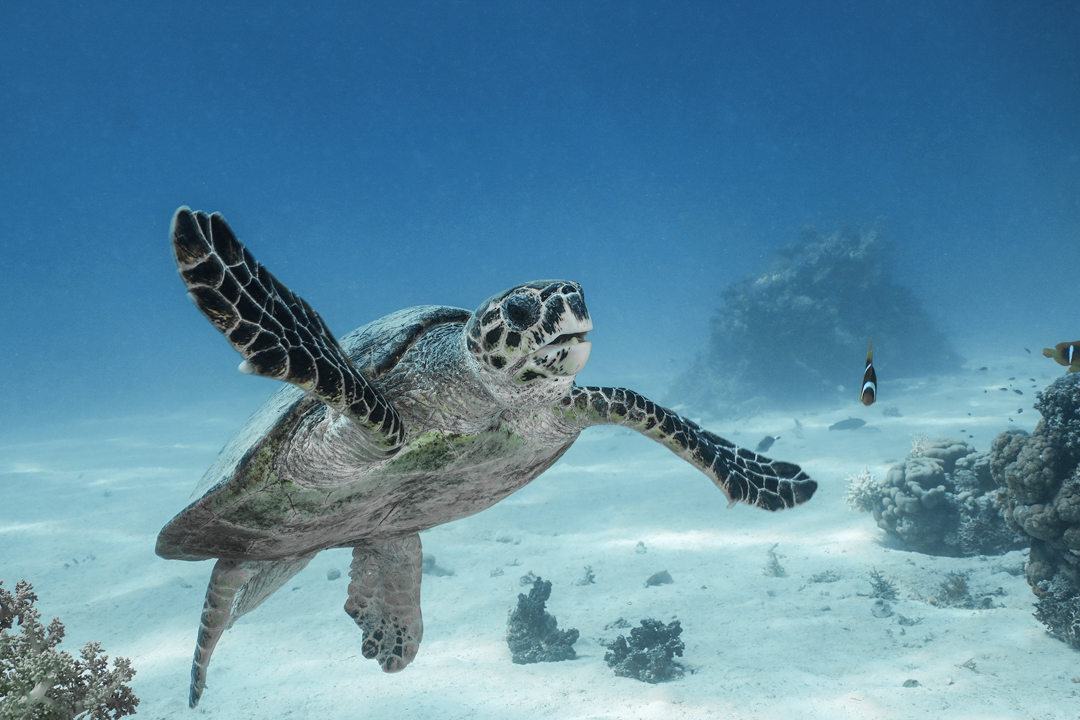 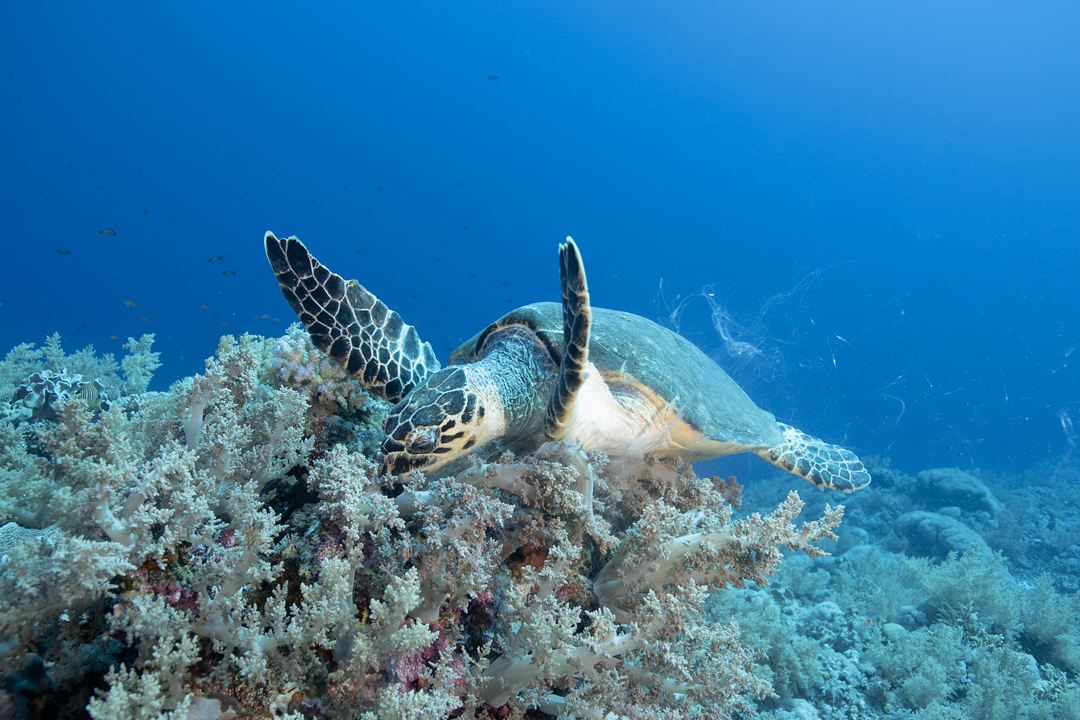 While I was low on air and others were surfacing, a large hawksbill turtle appeared out of nowhere below.

As the turtle fed on soft corals, balls and strands of a gelatinous substance formed. Some of the longer strands trailed off into the water behind it as it ate. 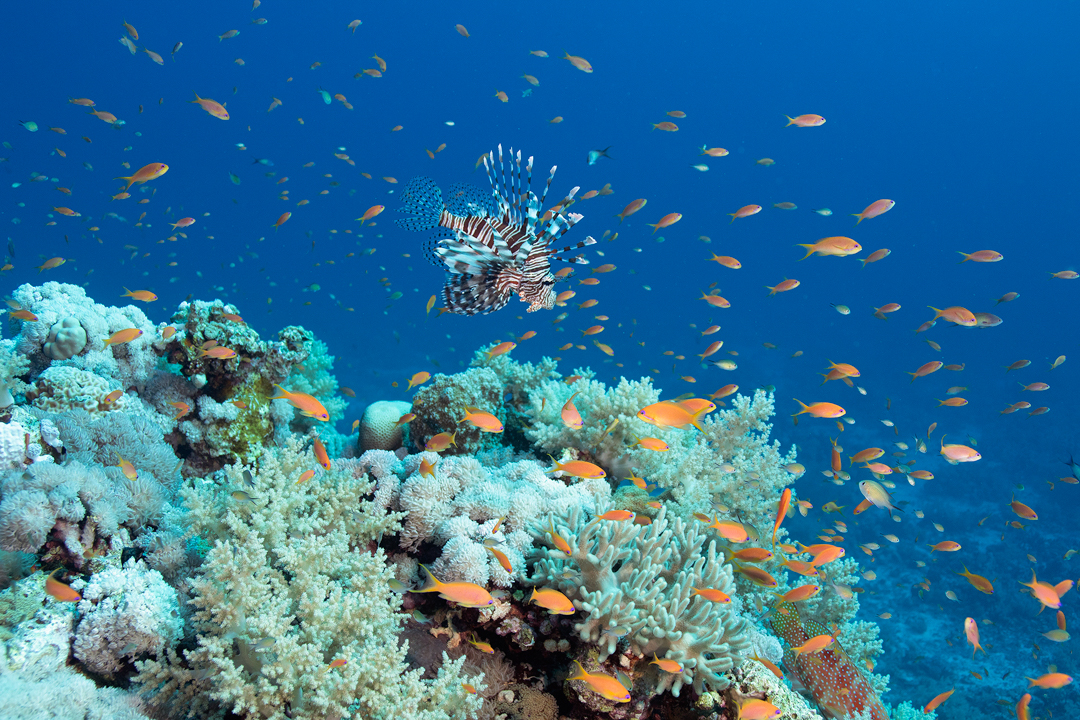 Instant joy and ideal shot.
Lionfish hovering among and above anthias. 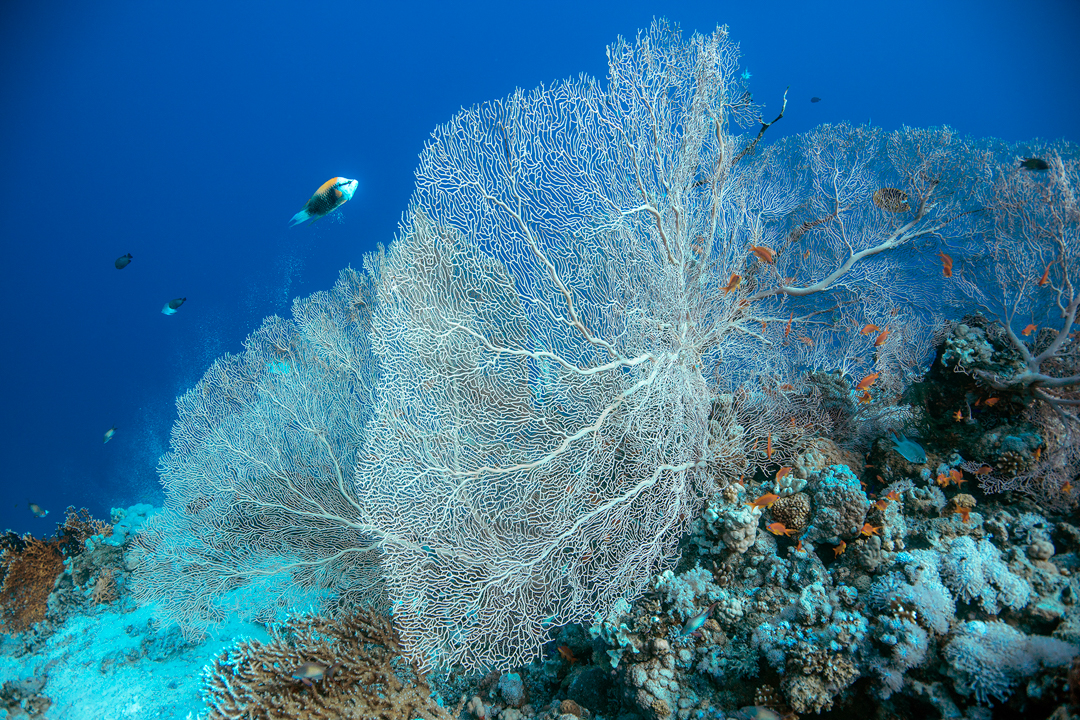 In this picture you see a male slingjaw wrasse approaching a species of fan coral about twenty metres down in one of the nicest places I’ve ever been—full of life!
Male and female slingjaw wrasses look nothing alike. These fish have the incredible ability to sort of throw their mouths out a few centimetres from their face! Presumably a useful adaptation for hunting, you often see them practicing this movement just to stretch. 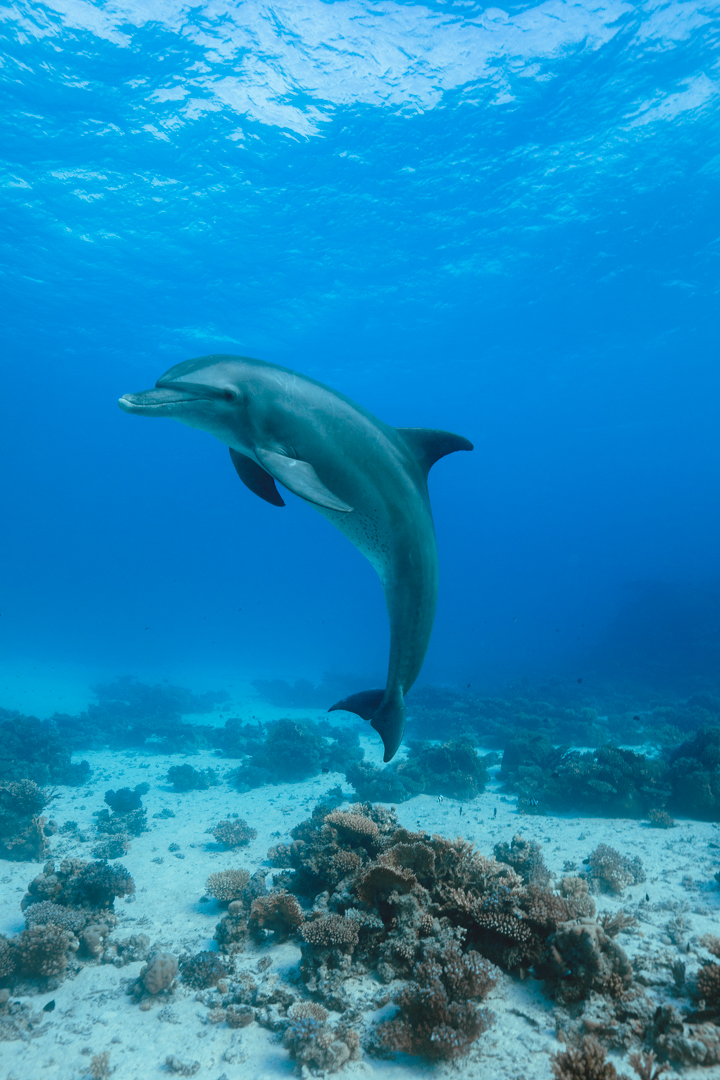 A bottlenose dolphin with a playful attitude looking on as my friends and I dive.

—not to be confused with Sataya or the also-famous Samadai we jokingly referred to as ‘someone dies’. 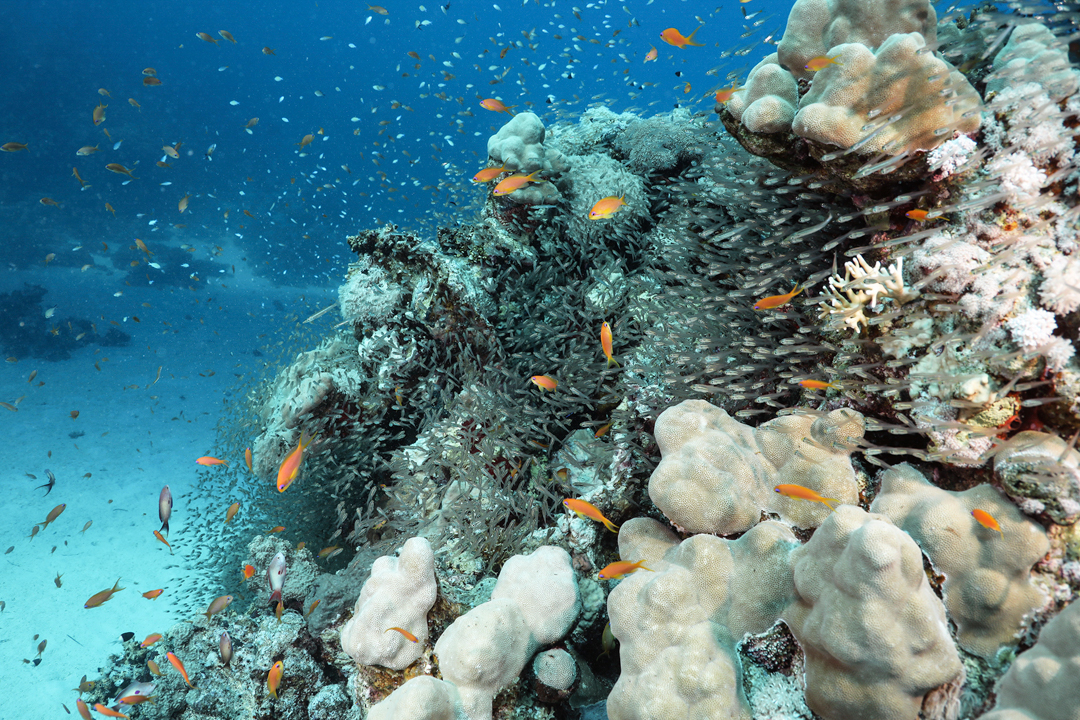 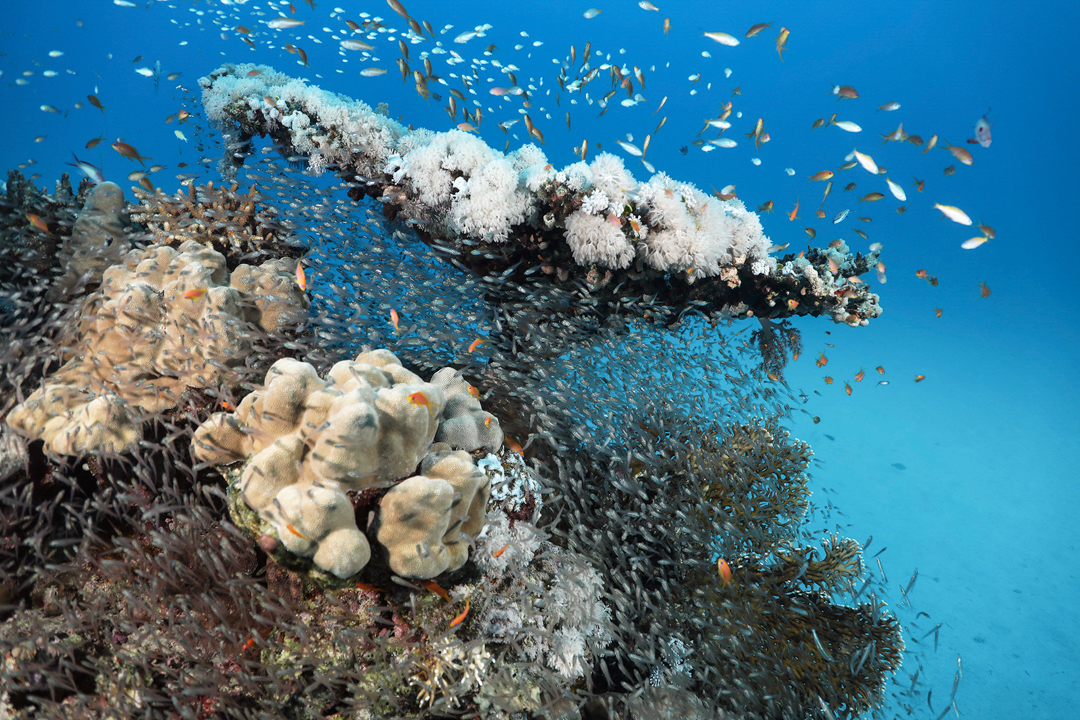 You always see glass fish in large numbers. They are very pretty, highly coordinated and lovely to watch.They pick beautiful and, occasionally, mysterious habitats— coral-heavy spots on the reef or actually inside shipwrecks. Every time I’ve seen them around coral a significant proportion of them were in the shadows.

On the very last day of our 2020 trip, we stumbled onto a myriad glass fish (pictured here) around and on topof a magnificent coral head just under the boat! 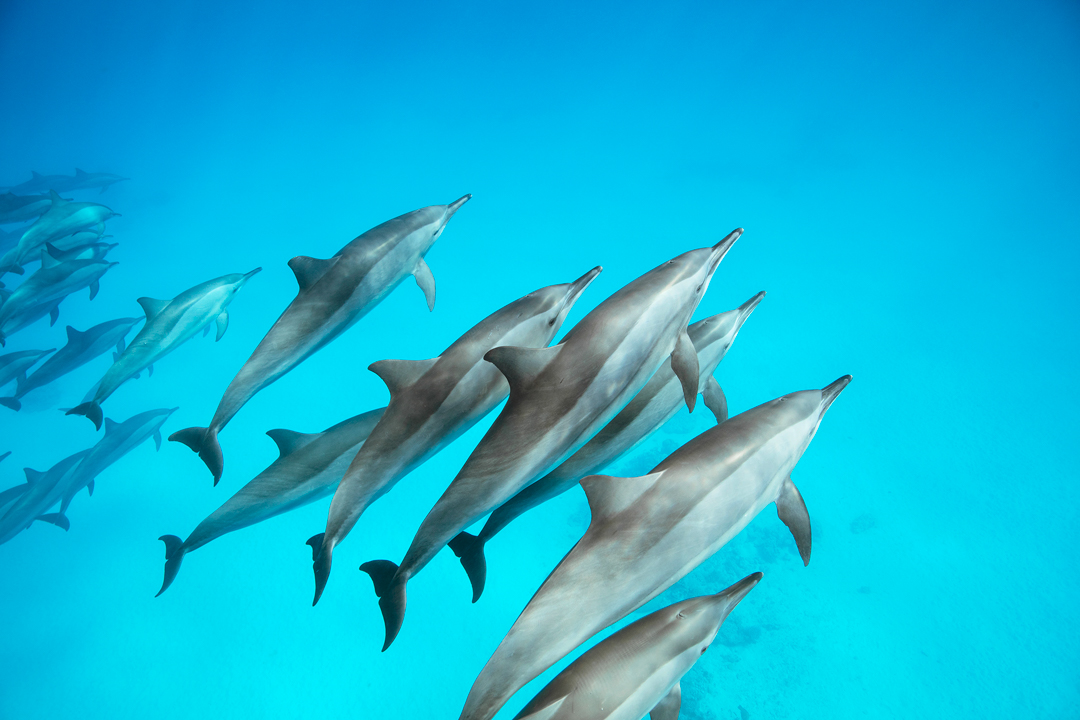 ‘Unidirectional’.
The Sataya spinners move forward as a unified group.

It’s usually more interesting when the animals are a little dispersed, in different formations or involved in varied activities.
But of course no view is boring, no behaviour truly uninteresting … and every person in the water with them is one of the luckiest on Earth. 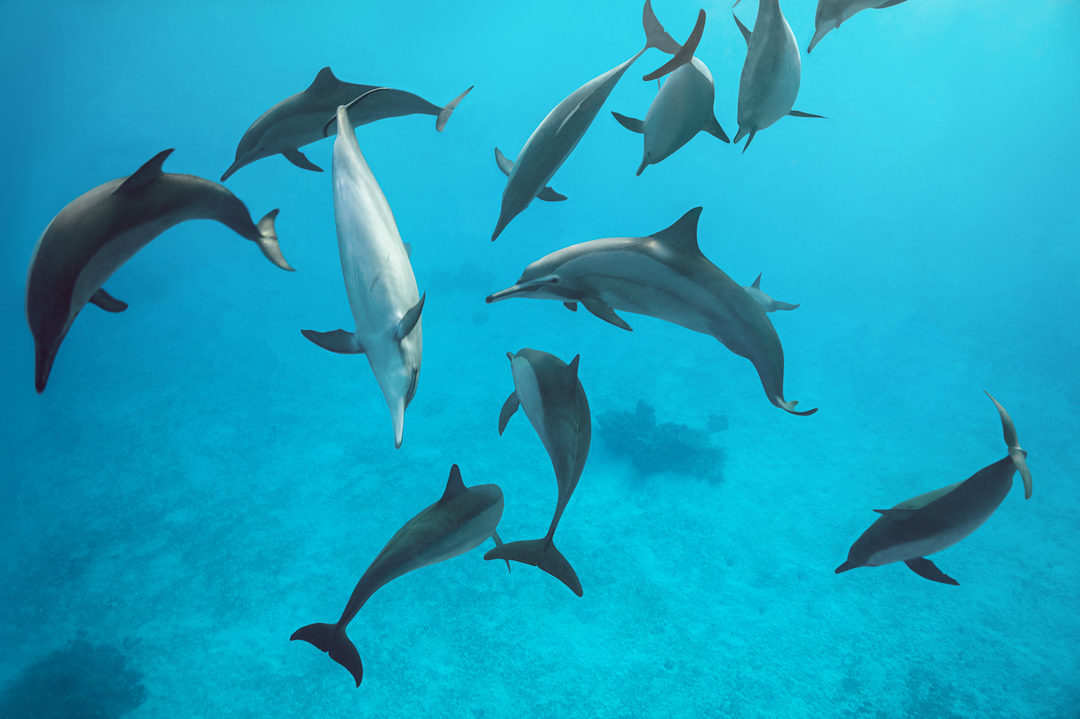 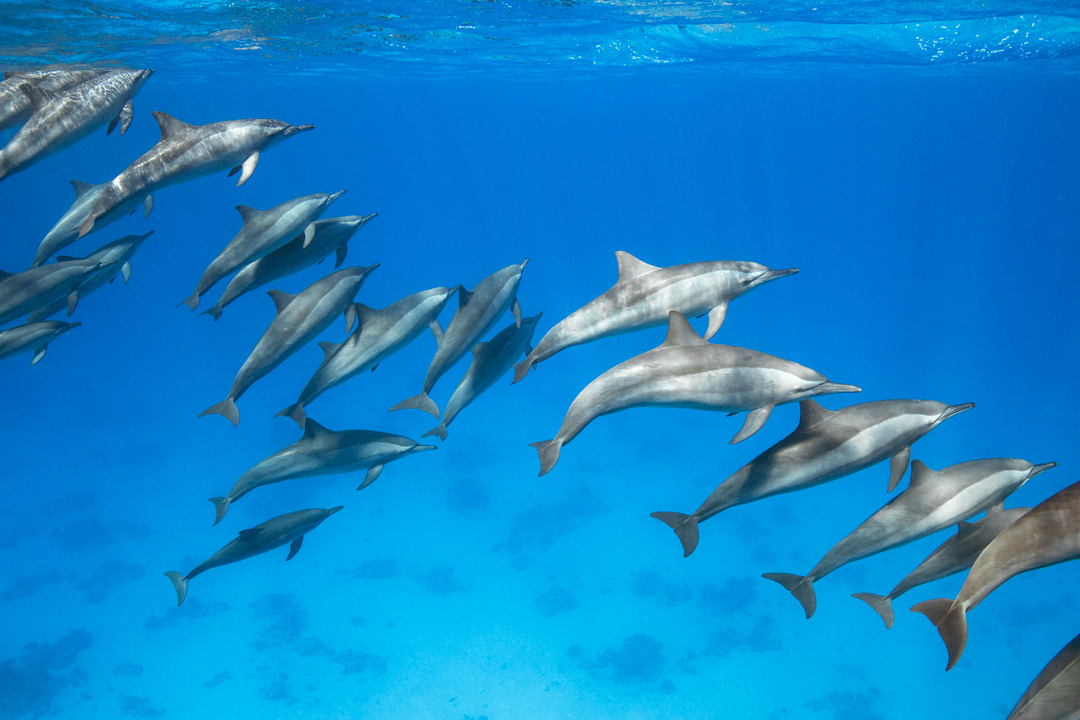 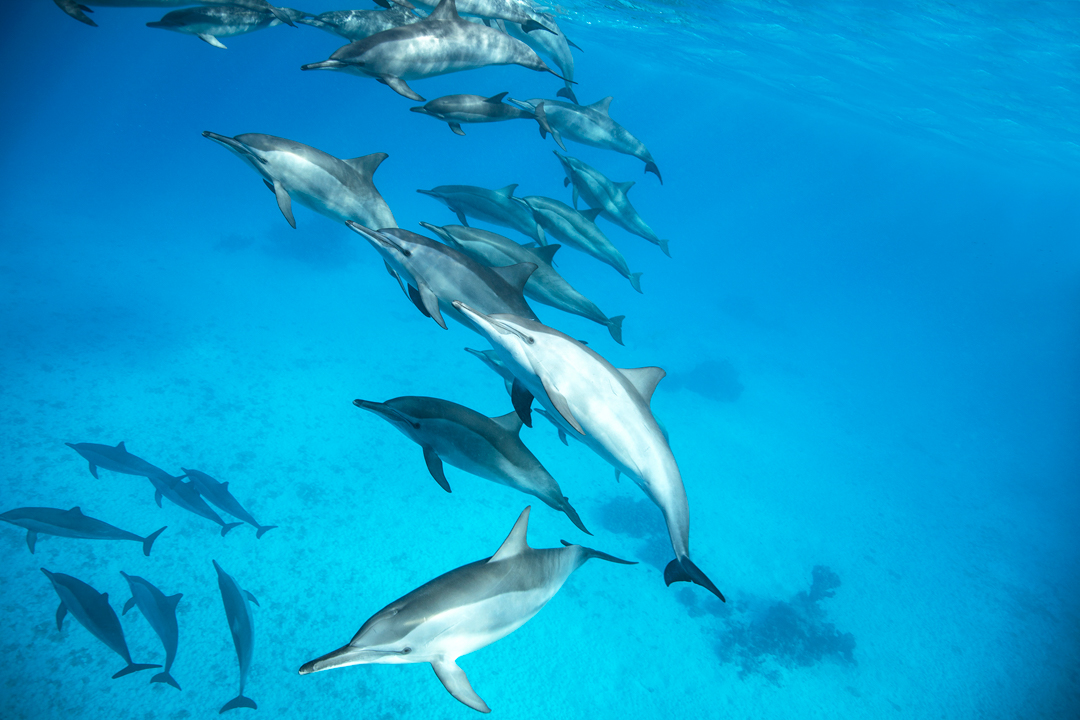 Life forms in an interesting formation…

The habituated spinner dolphins swim in the small bay of Sataya 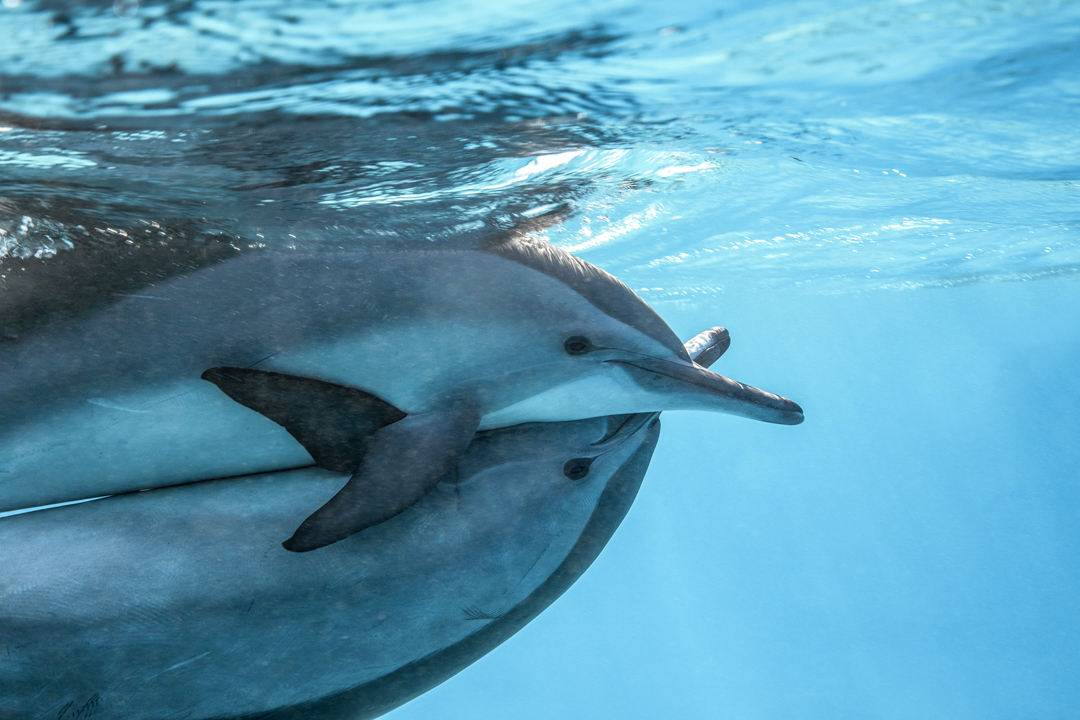 Dolphins mate a lot. Anyplace, any time of day and even for no apparent reason. Sometimes juveniles attempt it simply for practice. Sometimes it’s animals of the same sex you see making love (or trying).

When dolphins mate it is the male who flips upside.